I do not, as I have written before, believe in intelligent design.

It is a dualistic concept, and so misses the deep Truth of how things are.

And in our culture intelligent design is theistic and literal religious scriptural dogma in disguise in order to try and pass off superstition as science and Truth to corrupt the minds of the young in school and the old in life.

We project our stories, our, intellect, including our understanding of randomness and creation based on our four dimensional perceptions, our scale of time and space, on life as we see it, so there is the appearance of design.

I have written about Huxley and Darwin and my respect for them and evolution. I have a collection of contemporary (to them i.e. late 19th century) Huxley and Darwin books. If you have read about plant communication (like the recent books “What a Plant Knows” or “Brilliant Green”), you have Darwin to thank. I was watching a TV special on Carnivorous plants that quotes Darwin’s studies. I have his book on insectivorous plants, the American edition of 1875, that  someone picked up and bought over 140 years ago to read! I love having the artifact that is contemporary with these original ideas and great efforts to clarify the matter of what nature is up to.

Having set that out in black and white, in bold italics, let me say that it doesn’t mean I am not sympathetic to intelligent design believers who are sincere! I mean, life is so abundant and resilient: think how fast life rebounded after multiple huge extinction events. Cant keep it down. It would take a total destruction of earth to wipe it out, like a comet blowing earth apart, and even then some might survive on the remains of the planet.

And the manifestations of life, the “solutions” (forgive the anthropomorphizing) to problems of survival, are so robust, so varied, complex and elegant that if you don’t pause to marvel and question whatever you may believe, no matter how scientific, you need to watch more nature shows and read more nature books and regain a sense of wonder and awe with a bit of humility!

While random variation and the obvious continuation of what works, that is, natural selection, are true and clear mechanisms for evolution (a recent Scientific American article and new book “How to Tame a Fox” illustrates a human/fox model of how selection works to create species; a model because it is manipulated with intent that natural selection does not have),  I find, despite my loyalty to evolution, that I wonder if there isn’t, in some sense, more to it than blind random chance filtered through the editing function of reproductive success. It almost pains me to type those words, but I can’t deny the sense I have that the syllogism, strong as it is, of natural selection is true and necessary, but not sufficient.

Maybe it is a matter of something like the thought patterns in Bernardo Kastrup’s top down idealism, the nature of That Which Experiences (TWE) or Mind. Maybe it is something deep about the laws of nature that we don’t write understand. I know the standard answer is deep time, randomness rules when vast numbers are involved, but I am not so convinced. Yes, I know that sounds like intelligent design. But I don’t see it as occurring “outside” of Mind, as intelligent or designed by a higher power, deity or otherwise. Rather it seems to me that Nature and Mind are one, and that matters in how the Universe unfolds.

Maybe I am wrong and apostate in this, but I am so overwhelmed by the exuberance and range of life, the incredible lack of chance implied by the way it ranges into the extremes of the world and will not be denied, that I am willing to entertain the possibility that while random chance and selection clearly are important, they just may not be the whole story on what life is as a manifestation of Mind.

In fact, the problem with defining life, and it is tough to do, as I have written before, may imply that life is not all that special, except in the way that all is special. Or nothing is special. You know, like in “ordinary mind is the way.” Or that life is a projection of Mind, perhaps in a way that Biocentrism and the Lankavatara sutra seem to me to imply, or for that matter any non-dualistic Mind-only approach seems to me to imply.

Yes, we can all agree we are made of star stuff, not separate from the workings of the cosmos. But what underlies all of that?

The mind of God (if you like that theistic approach)?

Life is, I believe, as Stephen Gaskin titled one of his books, Mind at Play.

Does matter make mind or is matter a manifestation of Mind? A foundational question. Same goes for life as for all matter, for that matter, does mind make life or life make mind.

Life is Mind. Mind is life.

I am a medical scientist; this is not something I would want to confuse people about. I am only saying keep an open mind as to what life is and the role of randomness in the Universe we experience. 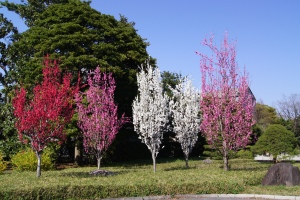 One show on PBS that inspired this post just now was an episode of Nature called Forest of The Lynx. Watch it. Especially note at 27-29 minutes about the trees and rain. Trees bioengineering their environment. Trees are too cool. Consciousness without brains in the animal sense of brains. Some trees, like some insects, function as super-organisms. And fungi and trees… OK I digress. Hard not to as this stuff is so wonderful! Of course now “the Hidden Life of Trees” is deservedly a best seller. Good book to read so you can really marvel at trees. But back to the PBS Nature show the forest of the lynx; at 27-29 minutes (watch the whole thing of course), they mention that trees release a molecule when they are stressed by drought, but don’t name the molecule. I am not sure what molecule they were referring to that trees release is (why don’t they just say? Frustrating when even PBS dumbs down; we can handle a word with two or more syllables), but here’s something similar: cosmic rays and trees and pine and marijuana resin and quantum effects might make clouds/rain. And have medicinal properties (Bold italics below are mine):

Atmospheric aerosols and their effect on clouds are thought to be important for anthropogenic radiative forcing of the climate, yet remain poorly understood1. Globally, around half of cloud condensation nuclei originate from nucleation of atmospheric vapours2. It is thought that sulfuric acid is essential to initiate most particle formation in the atmosphere3, 4, and that ions have a relatively minor role5. Some laboratory studies, however, have reported organic particle formation without the intentional addition of sulfuric acid, although contamination could not be excluded6, 7. Here we present evidence for the formation of aerosol particles from highly oxidized biogenic vapours in the absence of sulfuric acid in a large chamber under atmospheric conditions. The highly oxygenated molecules (HOMs) are produced by ozonolysis of α-pinene. We find that ions from Galactic cosmic rays increase the nucleation rate by one to two orders of magnitude compared with neutral nucleation. Our experimental findings are supported by quantum chemical calculations of the cluster binding energies of representative HOMs. Ion-induced nucleation of pure organic particles constitutes a potentially widespread source of aerosol particles in terrestrial environments with low sulfuric acid pollution.

(From Wikipedia, the free encyclopedia)

Pinene (C10H16) is a bicyclic monoterpene chemical compound.[1] There are two structural isomers of pinene found in nature: α-pinene and β-pinene. As the name suggests, both forms are important constituents of pine resin; they are also found in the resins of many other conifers, as well as in non-coniferous plants such as camphorweed (Heterotheca)[3] and big sagebrush (Artemisia tridentata). Both isomers are used by many insects in their chemical communication system. The two isomers of pinene constitute the major component of turpentine.

α-Pinene and β-pinene are both produced from geranyl pyrophosphate, via cyclisation of linaloyl pyrophosphate followed by loss of a proton from the carbocation equivalent.

Alpha-pinene is the most widely encountered terpenoid in nature[4] and is highly repellant to insects.[5]

In chemical industry, selective oxidation of pinene with some catalysts gives many compounds for perfumery, such as artificial odorants. An important oxidation product is verbenone, along with pinene oxide, verbenol and verbenyl hydroperoxide. [10]

Pinenes are the primary constituents of turpentine.

Pinene has also been used as anti-cancer agent in Traditional Chinese medicine, also for its anti-inflammatory, antiseptic, expectorant and bronchodilator properties.[11]