800 years or so ago Dogen said something to the effect that no thought requires a second thought (I paraphrase).

In a talk recently Nyogen Roshi said something that really helped me out of a place where I was stuck thinking about things I had screwed up. I mean things going back 50 years in some cases. Quite a litany when you reach into your bag of tricks that far.

All thoughts are self liberating.

In his new book “A Beautiful Question” Nobel prize winning physicist Frank Wilczek writes that Niels Bohr, one of  the fathers of quantum mechanics, said that you can recognize a deep truth by the feature that its opposite is also a deep truth.

Makes sense in that beyond the dualities of our senses and the language we use to convey such truths there is Truth that is not limited by our truth statements, our concepts.

So two opposite statements can be true because both capture some of our limited grasp of reality.

Most things we hold true just aren’t all that deep. Just working definitions and constructs that often don’t work all that well except to momentarily shield us from the painfully hard stuff. And they don’t do that very well without a large investment of energy. The real illusion is to convince yourself that the illusion works.

Two books just came out about science and the “big picture,” that is, what it is all about. Meta-meta, and all that.

One is “Beyond Biocentrism” by Robert Lanza MD with Bob Berman.

I suggest that you read it.

In full disclosure I have gotten to know one of the authors, Robert Lanza. He spoke at the Zen center where I practice (I encourage you to go to the Hazy Moon website where you can hear some of that talk) and I even collaborate on biomedical research with him. In fact, if you go back to my first blog on this site, he is the one who encouraged me to write in the first place by asking me about a GUT (grand unified theory) of Zen. After I demurred, I tried and came up with that first blog (and the much too cute, and much too grandiose, name for this website, Zengut).

I wrote a blurb that Bob Lanza included in the hard copy of “Beyond Biocentrism” (and on his website) calling it “…a must read for anyone who as ever wondered where modern science…. Is going. What does it all mean? Brilliant and insightful…” On Dr. Lanza’s website you can read a comment I made about his first book, “Biocentrism” where I wrote: “holy shit, this is a great book.” I will discuss “Beyond Biocentrism”  in the future in much detail and will compare and contrast it with the second book, which I have just started to read.

This second book is “The Big Picture” by Sean Carroll. He is a physicist at the California Institute of Technology (I just gave a talk at their faculty club there on ocular inflammation yesterday!) and has written several books and produced a couple of lecture series for the Great Courses on physics for lay audiences. They are quite good. Dr. Carroll seems very smart, sincere and honest. I see at the end of his new book he tackles consciousness, and while I admit I briefly peeked ahead, I want to digest the whole book before writing about his approach and comparing it to Dr. Lanza’s approach and Zen and my own impressions.

But at this point I do want to say Dr. Carroll starts his book by describing his perspective as “naturalism” and notes that Buddhism takes a naturalist approach, at least to some extent. And I have already come across some material I really like.

The Diamond Sutra ends with this poem [page 27]:

“As a lamp, a cataract, a star in space

An illusion, dewdrop, a bubble

A dream, a cloud, a flash of lightning

So, not bad for the first 16 pages, Dr. Carroll. Lets see where you are going with this. 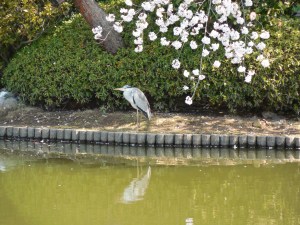