Sengai Gibon (1750-1838) was a Japanese Zen master who was an artist. There are many stories about Sengai. One I particularly like shows his courage and compassion. The Daimyo, the high ranking Samurai who was the local ruler, loved chrysanthemums. The gardener’s dog destroyed some of his prized blooms and so naturally the gardener needed to die. Sengai leveled the rest of the flowers with is trusty scythe, presenting himself to the Daimyo the next day. Sengai asked to be killed for certainly in this area the farmers, who were dying of hunger were ignored by the Daimyo while pretty plants were valued above a human life.

The Daimyo got the message.

One of Sengai’s most famous works is “Circle Triangle Square.”

There are many interpretations of what this painting is about.

The inscription at the left alludes to Sengai’s temple, an ancient temple already at that time about 700 years old. it was the first Zen temple in Japan. So maybe the shapes refer to the temple. Or the pagoda at the temple.

Or maybe the inscription is not about the subject of the painting and it is just in effect his signature. Zen masters in Japan and before that China were often identified with and named after their monasteries or the mountains they lived on.

Or maybe the circle is the cushion (zafu) the meditator sits on, the triangle is the mediator with the top point as the head, the solid base the butt and crossed legs. The triangle and meditator as mountain (the triangle/meditator/mountain idea was suggested in conversations with sensai Maezen at Hazy Moon). The square might be the zabuton, the square pad the zafu sits on.

I have no idea how much geometry Sengai knew. Clearly basic geometric shapes interested him enough to paint them.

I already discussed the perfect symmetry of a circle in the post “Circle and Wave.” Recall that a circle is an idea, defined as that object that is equally distant at every point from a central point. This distance is the radius of the circle. So all it takes is a distance to make a circle. The circle has perfect rotational symmetry, without beginning or end. When that symmetry is broken, we saw that we can produce waves, and these waves define particles, the basis of form.

We saw that breaking the symmetry of the ideal circle led to waves, particles and the manifest universe of form and is embodied in the yin yang symbol.

So circles are amazing but where do squares and triangles come in? How do they relate to the unwinding of the perfect circle as a wave.

Lets start with how a square and triangle relate. A square is two triangles.

Next, how do circles and squares relate? There are many ways, but here is one I like: Every circle precisely defines two squares, each of which intersects with the circle at four points. One square is inside, the other outside the circle. In a perfect symmetry, every square likewise defines two circles, each circle intersecting with the square at four points:

Those then define two larger and smaller squares and circles ad infinitum.

Now, how do circles and triangles relate and how do they make waves?

We can think of the circle as a clock face. This time we will think of the radius as a minute hand, here pictured as arrows, but this minute hand will go counter-clockwise starting at the 3 o’clock position. We will see how high the tip of the arrow is above or below the horizontal line bisecting the circle at several points. 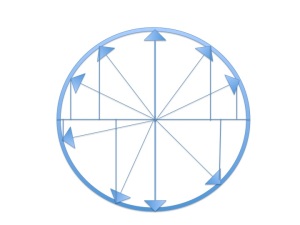 Next lets put each vertical line along a horizontal line with each clock hour marked, starting at 3 o’clock and going counterclockwise. Even with just a few straight lines we see a wave emerging:

If we were to add so many arrows and vertical lines so that the circle is filled with lines and arrows we would get a perfectly smooth wave.

What is this wave?

Each arrow in the circle goes from the center to the circle itself and so all are the same length. Each is a radius of that circle. It also is the hypotenuse (the longest side) of a right triangle.

Here is one triangle isolated to show that they are each indeed a triangle: 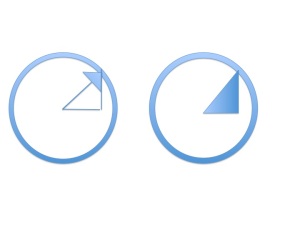 This figure Shows one of the triangles defined by the arrow and the line from the tip of the arrow to the horizontal bisecting line.

Now, lets say the arrow/radius/hypotenuse is one unit. It doesn’t matter one unit of what. A unit could be one inch, one mile, one light year, one unit of 6.753 mm, one diameter of an oxygen atom, it doesn’t matter; are all kosher as long as all other measurements that relate to that unit length, say of the other sides of the triangle, are measured in a way that is related to that basic unit (in inches, miles light years, multiples of 6.753 mm, diameters of oxygen atoms).

Remember basic trigonometry: the sine of a right triangle is defined as the length of the side opposite an angle (other than the right angle) over (that is, divided by) the hypotenuse. It is a ratio, no units, they cancel, just a relationship that always holds. Since the arrow/hypotenuse/radius here is 1, we defined it as one unit, the far side across from the angle is the length of that side over one, so that side IS the sine for that triangle.

So we collected these sides of the triangles, these sines, which were the length of the tip of the arrow above or below the horizontal bisecting line, and we created a sine wave!

Circle, square.  Every square defines two circles, every circle defines two squares, without beginning or end.  Square triangle. Two triangles make a square. Circle triangle. Every circle is made up of the hypotenuse of triangle after triangles, and these define waves (we just looked at one such wave, the sine wave).

So do you think Sengai had any of this in mind? Did he know trigonometry? Did he intuit that these basic forms could describe all form? These objects that have no physical existence but are abstractions, the product of mind, empty of substance?

“Nevertheless this great ocean is neither a circle nor has directions. The wondrous features of this ocean that remain beyond our vision are inexhaustible…. It is just that as far as my vision reaches for the time being, it appears to be a circle.” 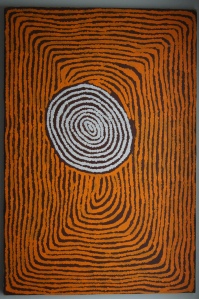 No essence, no fixed meaning or substance.

Yet we reify with concepts. We try to freeze and categorize reality. We try to capture it so we can deal with it on our terms. When the convenient tool of language distorts our appreciation of reality it is a (sometimes subtle, sometimes not so subtle) form of delusion.

A painting or a photograph that attempts to render a scene, whether a landscape, still life or portrait is a frozen approximation.

It is not how the world is really experienced. END_OF_DOCUMENT_TOKEN_TO_BE_REPLACED