All it takes is some heated sand and water (that is, a glass prism) to show that!

You have no receptor in your eye for yellow.

Rainbows aren’t things. They are contingent processes of light, water, quantum electrodynamics and an eye and brain

Having no mass and traveling through a vacuum at light speed a photons’ universe is one of time dilation such that the next tick of the clock never happens, so no time, and space contraction so there is here, so no space. So, see that star thousands of light years away here and now?

The Pleiades in the night sky

Photons pop in and out of electrons. That’s what a “quantum jump” is: an electron absorbs a photon (only some energies are allowed for a given orbit in a given atom. That’s quantum electrodynamics) and gets the right amount of energy to be in (jump to) a different (higher energy) orbit around the nucleus of the atom (or spits out a photon and goes to a lower energy orbit).  So atoms are constantly creating and absorbing light.

You can pile up photons in the same place, but not electrons and protons and neutrons. That’s why you experience things as solid, but not light. Light has energy though, and so it can cut through things and burn you up and give you cancer. However, it helps if you want to read a book at night. 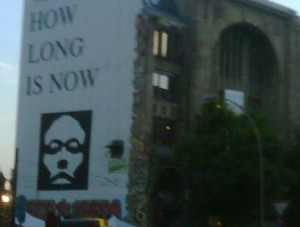 A building in the former East Berlin

It is easy to see that our idea of the future is simply probabilities and assumptions. It is also easy to see the past is stories we tell ourselves and can’t be found except in effects in the present for which we assume causes in the past. Neither has firm, concrete, reproducible reality, even if they seem fair enough approximations for day-to-day activities and decisions. For “practical” purposes, you might say.

But we are aiming to be living in the here and now, right?

There is a now we experience of course, isn’t there?

Are you so sure?

No matter how brief, there is a finite time, a gap, between event and experience, stimulus and response, energy change and sensation and perception. One study says the brain can integrate a simple visual scene in as short a time as 13 milliseconds, though most studies have suggested it is closer to 100 milliseconds. I suppose there are many factors at play for a given scene and brain. It certainly feels instantaneous, but that’s what our brain does, of course. It fills in the gaps.

The same goes for any sense. Impulses from sense receptors release chemicals that then change the physiology of a nerve creating electoral impulses and ions race in and out of the nerve. That nerve then signals others, which end up in some brain center ,which then sends signals to multiple brains centers. Some time after that, you put words on it and tell yourself a story about what is going on. That takes longer than 13 milliseconds of course; words are slow cumbersome things even when you think them.

So by time you see, hear, smell, taste, feel, think something, it is already past and you are anticipating the future.

Can we know the now? Sure for practical purposes. We don’t want to get lost in futures that may never happen or obsess about a better past we wish we had, so paying attention to something that seems ongoing and most proximate seems a good idea.

But lets not fool ourselves. Most of what we call the present is really the past, and we are already dressing it up in words and stories and anticipating the future when we think we are in the now.

And related to perception and time, is space. We speak of space-time. The here and now. No now, does here get a bit slippery too? Of course it does. Here relative to what? We know space seems to bend, expand and contract given relative motion. That’s Einstein’s relativity and the details aren’t important for this discussion. But I think it is instructive to look at one of the most basic of all entities in science, the massless energy quanta of light, the source of all we see, the embodiment of what we think of as color, the force carrying transmitter of electromagnetic energy, the photon.

There are many ways to look at the phrase “name the color, blind the eye.” The most obvious is that when we dress up an experience in labels we loose the immediacy of the experience. We pigeon hole it for future reference, falling into a dualistic trap. It may be useful if you are trying to paint a picture and want to be efficient in choosing what tubes of paint to open, but that’s about it.

There’s another way that color is a dicey concept that I like, and I think it is very telling about how things work regarding our dream of time and space. You probably know about the Doppler effect; most up us have experienced a sound becoming high pitched as it races towards us (a siren, for example, or a car), then becoming a lower pitch as it races away from us. The waves of air that make up a sound are in effect compressed as that sound comes toward us, then stretch as it goes away form us.

So what is the sound “really”? Is the high pitch sound or the low pitch sound more real? Of course neither, they both are predictable effects of motion. But it does make it hard to talk about THE sound the car or siren makes (even not taking into account all the modifying features of the environment, the atmosphere, other sounds, your ears and most importantly, your brain that turns the energy pulses in the air into sound then tires to make snense of it and relate it to your prejudices and conditioning).

A similar thing happens with light. You may have heard of the “red shift” in the light from stars as galaxies race away from us. Well, this happens all the time. You can only speak of a photon of a given energy being a certain “color” if the object creating that photon and your eye are perfectly still relative to each other. If that object is moving toward you (or you to the object, or both to each other, doesn’t matter, the photon doesn’t care. Relativity and all that), it shifts to blue. If it is moving away from you, it shifts to red. Same photon, full spectrum. Sure, this effect is too small to percieve at most speeds, but it is real and universal. The photon is no one color, no independent color. It all depends on the relationship of the observer to the photon.

And of course we are always in motion. Breathing, heart beating, land masses moving, earth moving, solar system moving, galaxies moving all relative to each other, Indra’s net of interconnections.

No past or future, and even now is a dicey concept. No there, no here, no in between.

Are you sure about here and now? Sure we want, as the Zen saying goes, to occupy the ground we stand on. And we don’t want to miss what is in front of us worrying about the past or future. But do we really grasp the present? How many ‘presents’ make up the thought of a now? How many instants combine to make up a perception? Is ‘Be Here Now’ just another cockamamie concept we strive after using our dualistic notions? Can we hold on to the fleeting moment, trying to encompass it with our thoughts and feelings, our fears and hopes, without missing the next one? Are we impressionists, who see the ever shifting play of light but then try and nail it to a canvas to contemplate at a later time? The later time of our idea of now?

On the other hand, outside of our dualistic concepts, our sense of self and other, is there anything except now?

Sensation and perception are how we seem to experience the world. Practitioners of Buddhism and science have given a lot of attention to how we do that and what it means.

From the scientific viewpoint, sensation occurs when a specialized organ interacts with the form of energy it evolved to interact with. These specialized organs are the sensory receptors in the eye, ear, nose, skin, or tongue, for example, though animals have a large array of receptors, like infrared receptors in pit vipers or sonar in bats.

And in an inspired insight I particularly admire, in Buddhism the brain is also a sense organ, one that “perceives” both sensory inputs from other sense organs but also you might consider thoughts a sensory input. END_OF_DOCUMENT_TOKEN_TO_BE_REPLACED