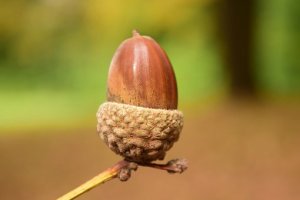 A Zen teacher pointed out that you don’t know what makes the acorn become an oak tree. Of course, I thought when I first heard him say that, you could describe the mechanisms, that is, the DNA/genetic programs that sequentially activate to crate a tree form an acorn. That’s developmental biology, and understanding that has lead to important insights that have fueled the attempts at using stem cells for medical purposes.

But is that what the Zen teacher meant? I can describe muscle fiber and energy interactions when a limb moves, but that doesn’t tell me in and of itself if the movement generated is that of a predator after a meal or prey trying not to be dinner, whether a slap or a caress.

And where does that all come from, that predator and prey, that caress or slap?

Going a bit deeper into that acorn, it clearly is a representation of the incredible diversity and activity of life. Where did that set of programs come from? How did it evolve? Is it really different from all else in the universe, that which we consider living and that which we don’t?

Which brings us to carbon.

Carbon is the backbone, foundational, element of what we know of as life, and once you know about carbon, it seems obvious that it should be in our particular cosmos with the laws of physics and chemistry as we experience them. Carbon atoms can bond symmetrically with four other atoms and itself making complex molecules and long chains. Carbon is the right size to combine to make pockets for other atoms we use in living processes, being the smallest of any atom that can form four bonds. Carbon can also make double and triple bonds that increase the flexibility of the atom and it’s chains in form and function. Carbon also doesn’t tend to lose electrons or gain them and so tends toward an electrochemical neutrality that can be altered when it links up with other atoms that aren’t so mellow, another way it makes for a good backbone for complex molecules with important flexibility of electrochemical energy states.

Carbon is so simple and elegant that it is likely that the first “solid” substance in our universe were microscopic diamonds, the regular crystalline form of carbon. And we too are in some ways crystalline forms of carbon (crystals being regularly repeated patterns of atoms), and certainly we can make crystalline forms of many of our essential molecules like proteins and DNA.

The first diamonds would have been small, just a few atoms

Easy to appreciate the beautiful symmetry of this diamond crystal

Fun fact: diamonds are super hard, but another crystalline structure of carbon, graphite, is super soft. All on how the layers link up or not.

How carbon crystals are in the world is how the carbons combine in 3 dimensions. Graphite layers slide on each other, or have cleavage areas and so aren’t as hard as diamonds where the links are in 3 dimensions

So our physical manifestation started as diamonds and we are dependent on crystalline structures of the simplest atom that can make 4 symmetric bonds as well as double bonds. 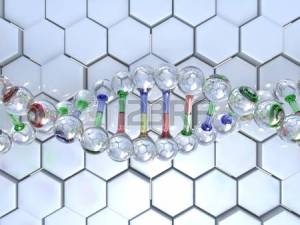 DNA is not a completely regular crystal (aperiodic). It is this lack of absolute symmetry that makes it a carrier of information. Compare to the diamond structure above. It is in the glass bubble like structures in this highly stylized image of DNA that change, asymmetry, information,occurs. Well and in the cell the associated meta structure and the added chemical groups and associated proteins…

This artistic image of DNA stresses the regularity, symmetry and elegance of the molecule.

How did all of that happen?

It goes back to quantum mechanics and the fundamental laws of physics. Energy transformations. That’s how all atomic and subatomic reactions are best described.

As Stephen Hawking asked (I paraphrase): what fire, what energy, do the equations (whether quantum mechanics, relativity, string theory) describe? What brings this fire, what breathes life into the equations?

Some say a god or gods. That seems to fit their experience and work for them.

The Zen answer is easy by rote: Mind.

This is similar to Lanza’s and Berman’s Biocentrism, or Kastrup’s idealism.

Not so easy to experience directly, to the core.

Some say there is no answer, it just is, and in a certain sense I agree. After all, any “answer,” in our usual sense of the word “answer”, depends on concepts in our monkey mind, derived from our monkey senses, relating to our parochial realm of limited 4-d experience, explanation and intellectual understanding. We seek answers that can be digested when there is nothing to chew on. Take a bite, it disappears, dissolves like a mouthful of cotton candy, into a haze of quantum probability of different energy levels at best.

That acorn sure does go deep. It cuts like a diamond.